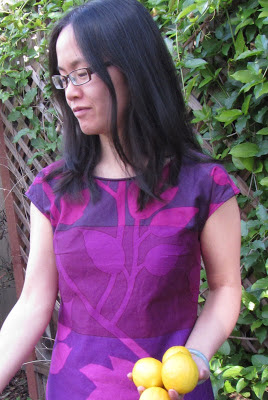 About half a year ago, my coworker found me at lunch and said, "You have to go to the Crate and Barrel Outlet Store in Berkeley, they've got walls of Marimekko fabric marked 75% off."  Hello, I was there.  I'm not sure what it is about me that is drawn to prints that are clearly not intended for apparel and try to make them into clothing, and clothing I might try to sneak into a work wardrobe, no less. 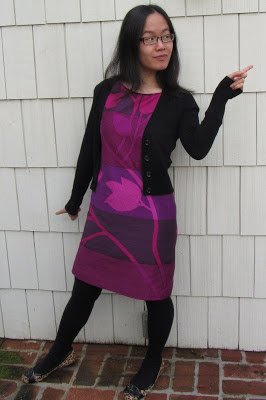 (I mean, I could conceivably wear this outfit to work, right?  Maybe?) 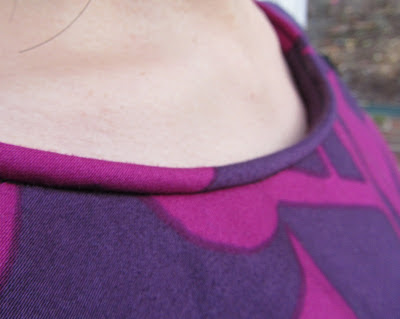 Self-piping.  I really like that detail on a dress with a simple silhouette.

Dress #12 // Mari
Pattern: Sorbetto with those little cap/kimono sleeves like my Danburry, eliminated front pleat, extended to skirt length.  Might need to take it out by an inch at the hips if I ever make another SorDressto.
Fabric: 2 yards of satin-finished cotton, Marimekko for Crate and Barrel, plus grey Bemberg lining so that it won't stick to tights. 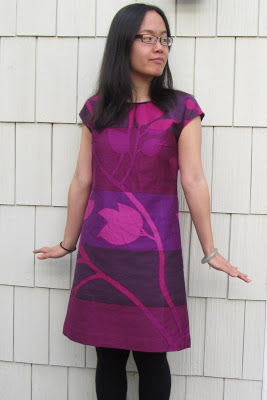 I was paying enough attention to not have bursts of leaves emanating from, well, the girls, but forgot entirely about the potential for "Garden of Eden" jokes.  That bright pink leaf you see at my bellybutton?  It is extremely serendipitous that it does not fall 6" lower.  Personally, I wish I had scooted the print horizontally about 6" so that it is a bit better distributed (and that bright pink bellybutton leaf was offset), but it'll do. 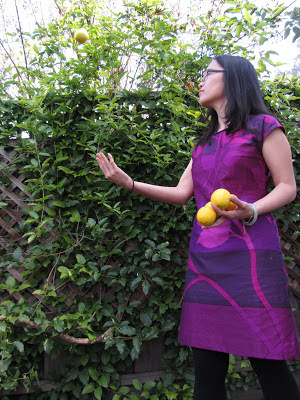 The greatest thing I got from this dress is the power of slapdash.  A recovering perfectionist, I went really slapdash on this one ... which for me means I did things like sew without pinning.  Gasp.  I know, I know.  I'm expecting you to fall down at that revelation, too.  Things like - I set the back darts too wide - I thought about ripping out and fixing them, and then decided - "HONEY.  It is a bright purple striped dresss with enormous leaves on it.  How often you think you're wearin' this thing anyways?"  That's right, I left the wonkiness in.  For a recovering perfectionist, that's saying a lot.

But slapdash goes a lot faster, and without too much appreciable impact on the quality of the finished product.  So, I think my sewing resolution for 2013 is to embrace the slapdash. 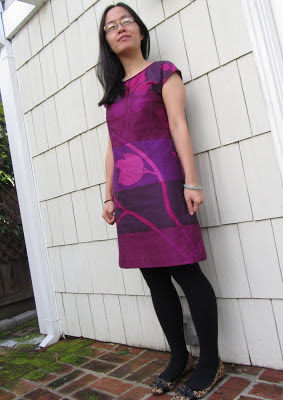 Thanks for the nice wishes for the 2013! Happy New Year to you, too! May it be successful and I wish you more slapdash projects that end with as cute result as this dress did! I actually like the fabric and the way you used it. It didn't remind me of garden of Eden, so I believe you're safe. :)

I love the fabric and it has such great colours. I think slapdash has worked this time and I would not have noticed the garden of eden thing at all. A shop with 75% off marimekko sounds wonderful to me!

It looks totally work-friendly to me! I think the print is great, and it doesn't look wonky to me at all!

Very nice. I love the colors!

So cute! I've admired the marimekko fabric at my crate and barrel but have never seen it available for purchase.

OH WOW - Jessica this is GORGEOUS! I love that colour and the print and the simple shape :D
And yes of course you can wear it to work... just add a smart jacket ;)

So pretty! I think you need to teach a class! Any interest in a very beginning, beginners quilting or perhaps a how to
Refashion a sweater class! I'm thinking Crispina French west coast style!!

This is such a stunning fabric and so the dress is stunning and of course you can wear it to work. I love it.

Yay for slapdash and sewing without pins! (Well, when not easing, or sewing gathers, or stuff. Right?)
And really, you make those prints look awesome. And totally work-appropriate... ish. I'd wear the dress to work! (If I worked. Which I don't. Yet. And if I did, I'd have to wear scrubs. But still.)
Anyway. Happy New Year! :)

Congrats on being able to let the little imperfections go. Such wonderful fabric, the dress looks great.

Fabulous dress and lots of people love to use Marimekko to make clothes. I think the fit is perfect.

I just adore this dress. I would love to have one to wear to work. You have done a top job with it!

I don't know much about fabrics but what I do know is you look sensational in this one!