A Detour Towards Ridiculous?

After teasing you all with green spec's and then other non-essential sewing, I got hit with a tidal wave of inspiration powerful enough to cause further detours off the mental sewing queue (truth be told, neither one of those prior projects had been in that mental queue, either! All the queue seems to consist of are my snooze-worthy projects.) What ensued was literally a case of she saw! she coveted! she dove in like a madwoman! Which is entirely the definition of "ridiculous," methinks! 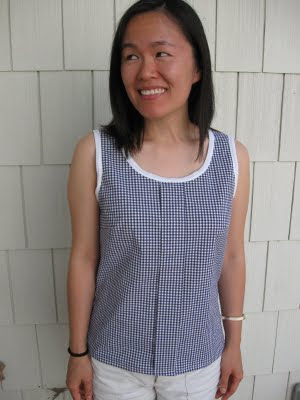 Not quite the same as the inspiration top. I had this Italian checked stretch shirting in my stash, 1 yard chopped up in odd segments (math gone wrong, don't ask -- except, I ordered this when I was bound and determined to make a blue gingham-looking chicken scratch full skirt - and who does that with 1/8" checks??? The seeds of ridiculousness were planted early, my friends) and the premade navy bias tape didn't match, so I went with white though I'm wondering if I would have preferred self-fabric bias tape, now that I look at it. Oh well. With the premades this project took about 3 hours from start to finish, not bad if I say so myself. 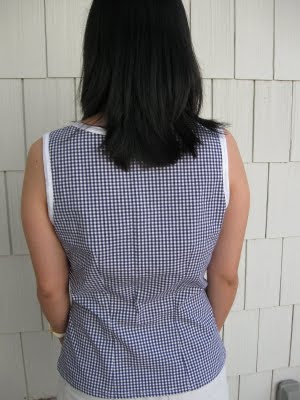 Hm, sketch in the back, no? But the eagle-eyed of you may point out that the original Sorbetto does not have back darts and you'd be correct. 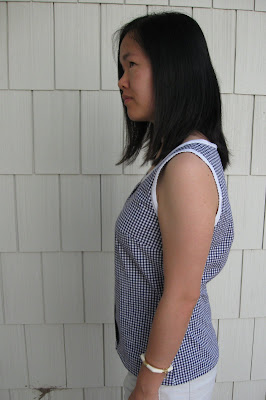 Even more sketch. And there's a good reason for that. This is not actually the Sorbetto pattern. It is my sloper and it still looks as darn blousy in the upper back as my last blouse because I did not do a darn thing to change the upper back. Actually, it looks blousier because I did make the bottom half more fitted. Go team.

Why is this a Ridiculous project?
Let me count the ways ... One, I work in San Francisco (cold year-round), rendering this unwearable at least 5 days out of the week, most weeks out of the year. Two, who goes and drafts their own version of a free pattern??? Three, if the last version of said own sloper block had major upper back blousiness issues, why would one not address that in their next iteration of the sloper??? Four, well, I literally saw, coveted, and started drafting. Practically instantaneous. It really was the perfect impulse project.

What was your inspiration and process?
Saw, coveted, drafted, stitched, shrugged over the bias tape malcontent and moved on, have decided will wear regardless. Have most certainly decided to never take sideways or back photos of this blouse ever again, nor to ever catch my image in any but a fully frontward-looking angle.

The technical: after my last blouse, I knew I needed to make some mods. My sloper's orginal back pattern piece had the waist line extending out from the upper back, so I just dropped that line straight down to the waist and made a new side seam to the hip that was 1/4" in from the original (to remove some of the extra side ease) and also used a less curved seam for that side seam. I also dropped the back darts down to the bottom of the blouse and made them 1/4" wide on each side. These 2 mods took 1.5" out of the bottom and waist of the back pattern piece. I also redrew the armholes to give me a lot more room, but I may have gone overboard in that regard (these seams sewn at less than 1/4" SA). I also removed 1/4" from each side at the lats (so, at that widest point of the back piece). You know, looking at these photos, I'll bet I could extend those back darts up by a couple inches.

For the front, I narrowed the bust by 1/4" on each side, redrew the hip line, then added in 4" for the front pleat (no idea what it actually is on Sorbetto). Left off the fisheye darts and prayed, with the stretch and the drapey yet crisp content of the fabric, that this would hang nicely off my frame ... and I think it does ... from the front.

Lessons learned?
Hm. I feel like this blouse can't decide if it is Italian sophisticated or country picnic, so I guess the lesson there is -- don't half-ass something, if you're going for a look then go the whole way, even if it takes a bit extra time!

But actually, I think the lessons are twofold. First of all, I rarely wear shorts but this top practically begs for a pair of shorts, no? And you know what? Not sure why I've shunned shorts for the past decade! They're brilliant in their own right. So thank you Project for getting me over that hump.

Second of all, sometimes it's really fun to just go with that impulsive project! When it works out it is so satisfying. And I feel like the more of these that I tackle, the better I get at them. The better I get at improvising, going on instinct, and best of all not angst-ing over the sewing, the planning, the new techniques, the off-roading.

Verdict?
Ridiculous? I ... think so. It seems so plain and, um, Sorbetto-ish to be Ridiculous. But I think the process was ridiculous enough.


I don't know, what do you think? Does it qualify as Ridiculous? Have you had projects like this?

PS: for a lovely other take on Sorbetto in navy and white, check out Alessa. I totally feel like we're same-wavelengthing!
Posted by jessica

Well I like your Sorbett-ish very much indeed! And I LOVE it when a project sweeps me along in its path until it is done.
My daughter tells me that all the girls at school tie their t-shirts at the back with hair-scrunchies to make them "fit". Vogue models use hair-sectioning clips to hold their clothes in shape so that they look fab from the front. It's the way to go!
I think there is a strong argument for only making the fronts of clothes and folding flaps over your shoulders like a paper doll ;)

I LOVE your version way better then the original and it looks really good on you to boot.
San Francisco cold year round? lol. I guess being north of you that sounds funny :)

Definitely ridiculous! LOL I have also drafted my own patterns to match a pattern I purchased but didn't believe would fit without major changes. Like I bought the pattern for inspiration or something -- ridiculous! Keep bringing the ridiculous!

Yay for ridiculous! It looks good, Ilike the trim and the gingham. As you are already deep into sloper making I can see reason in your making your own pattern version instead of using an existing one. x

In a way, I suppose all sewing is ridiculous considering how easy it is to buy RTW. The sloper looks like it is edging toward perfection. I suppose that to be truly scientific about it, you would only want to change one parameter at a time anyway to see how it affects the overall fit. right ?

Sewing is all about the ridiculous for me, so I'm in love with this project of yours. My most recent moment of passionate clothes-sewing landed me with a gorgeous yet wholly impractiacl maxi dress, that in a British summertime doesn't end up with too many outings. I count one so far and that was around the house...